With the 3 Mars missions launched in 2020 about to land on the red planet and companies such as SpaceX looking to land human colonists on the red planet in the future, it is worth examining how some upcoming breakthroughs to help make the trip to Mars shorter. Currently, the trip to Mars takes 6 to 8 months for spacecraft from Earth one- way, when launched every 26 months to take advantage of the 2 planets being closest to each other, which is called a conjunction. Known as the Hohmann transfer, it is currently the most efficient way for humanity to travel in space with the largest amount payload and lowest amount of propellant.

When traveling to Mars on a 6 month trip, there is the potential for radiation to affect the astronauts body and instruments. This level of radiation can be shielded for instruments on missions like Mars 2020, but this length of time traveling in space poses a risk to the human body. This risk comes in the form of damage to human DNA and increased risks of cancer that many find these risks to be too great.

Scientists have known for years that might be a way to reduce this trip from 6-8 months to 3 months, but it wasn’t until recently that the research has provided a viable option that NASA finds acceptable. To reduce the trip to Mars, future spacecraft will have to ditch traditional chemical fuels and replace them with a technology such as nuclear or fusion technology. Humanity is currently far from being able to implement fusion in a way that can be harnessed, but nuclear powered spacecraft have been a topic of research for years.

Nuclear powered rockets have been on the minds of scientists and have always seemed just beyond reach. The first research into nuclear powered rockets began in the 1940s, with key gaps surrounding the use of highly enriched uranium and issues with capturing and disposing of the radioactive particle waste.

However, there have been recent breakthroughs that have meant that the use of nuclear rockets for travel to Mars might be realized in the timeframe of a few decades. In 2017, NASA provided a contract to examine and build a launch-viable nuclear reactor using low-enrichment uranium for fuel.

More recently, with the release of the December 16th, 2020 Presidential Memorandum known as “Memorandum on the National Strategy for Space Nuclear Power and Propulsion” or Space Directive 6, the US laid out a national strategy for the use of nuclear power in space both as a propulsion element and as a power source. 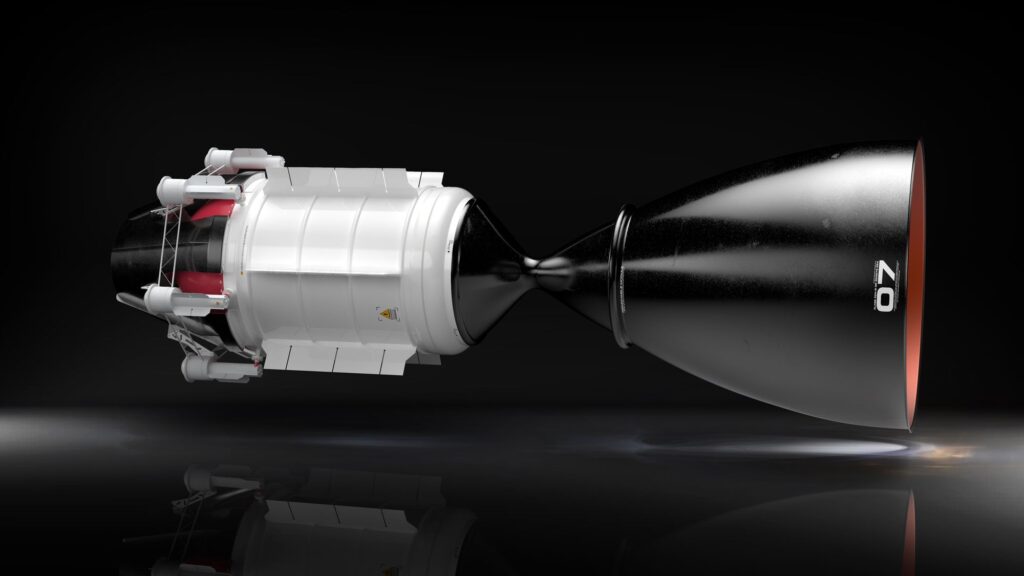 This memorandum coincides with an announcement from Seattle based company Ultra Safe Nuclear Technologies (USNC-Tech) which states that the company has “delivered a design concept to NASA as part of a study on nuclear thermal propulsion (NTP) flight demonstration.”[3] This design by USNC provides a viable design for future nuclear powered rockets as USNC said their design has a theorized significant impulse that is significantly higher than alternative propulsion methods.

USNC-Tech says that their small hardware prototype uses commercial grade uranium, enriched to less than 20%, and is on track to demonstrate a half scale system by 2027, which means that the next step would be building a full scale system, and possibly even flying it to Mars.[2] This means that if successful, USNC-Tech could be building engines for a spacecraft that could take humans on a 100-day trip to Mars by the mid-2030’s. A 100 day one-way trip to Mars could mean that completing a round trip from Earth to Mars could be viable in a calendar year.

Have an idea on an article you’d like to see us write? Leave a comment or message us on social media!

The full text of the Space Directive Policy 6 “Memorandum on the National Strategy for Space Nuclear Power and Propulsion” can be found here.